Passion in the Beauty that is Life

Being able to witness a chicks journey as they bring themselves into this world, is an absolutely amazing, magical experience that everyone should witness at least once in their life.

It all starts the day that the fertilized eggs are placed into the incubator or under a broody hen (a stubborn hen who just wants to sit on all her eggs and make herself a nest).

The process is fairly quick; from fertilization to the chick hatching. This averages about 21 days for chickens, and 28 days for peacocks, guinea, domestic ducks and other birds as well. There is a lot of work involved in this process to ensure that there is a successful hatch.

Heres a little look into the journey from egg to the hatching chick. This will be of a Guinea chick, with a 28 day cycle.

Day 1 – Eggs, which are believed to fertilized, are transferred into an incubator. The incubator is turned on before hand to ensure that it is working properly and holding temperature. Usually about 99.5 degrees fahrenheit (this varies depending on what kind of egg you are hatching; chicken, duck, peacock, quail, guinea, etc). A drop or increase in temperature by even a degree and the embryo could be ruined. Humidity also must remain throughout the entire process between 40% – 50% and then increased to between 65% – 75% while the eggs are in “lockdown” during the final days before hatching.

The eggs are believed to be fertilized if when candled; held above a candle or light source in a dark room, there is a small donut shaped mass or blastoderm that can be seen.

If the incubator does not have an auto turner, these eggs must be rotated at least 2 times a day and at roughly the same time each day. Each egg is marked with an X on one side and an O on the other. This ensures that all eggs are rotated and makes it easy to determine which have and have not been turned.

Day 2 – Blood vessels are starting to appear, the brain and heart begin forming.

Day 3 – The heart begins to beat. Blood vessels are thickening and growing.

Day 4 – The Nose, limbs and wings are beginning to form.

Day 6 – Voluntary movement begins, the chick is now starting to move within the egg on its own.

Day 8 – The beak is growing, the upper and lower mandibles (jaw) are now visible.

Candling can also take place on this day, again the egg is held above a candle or light source in the dark. We are now looking for movement within the egg and to ensure that the “mass” we saw at the beginning has grown. If there is no growth or no longer a visible chick, the egg is removed from the incubator.

Day 10 – Down feathers begin to grow

Day 13 – Wings and limbs are developing even more.

Day 15 – Eyelids start to grow over the eyes. Tail feathers are growing.

Day 17 – Down feathers are continuing to grow.

Day 18 – Wings and legs are becoming more defined. The neck is increasing in length.

This is also when the final candling happens. Again, eggs that are not developing or are not showing movement are removed.

These down feathers are why chicks are so fluffy after they have hatched. Once they are dry, their down will be fluffy. Over the next weeks, as the chick grows, the is down will be replaced by actual feathers.

Day 21 – Egg tooth is fully developed and ready to be used.

Day 23 – Embryo heads toward the blunt end of the egg.

This means that the air sac will now begin to form at the blunt (wide) end of the egg.

Day 25 – Albumen is absorbed and the yolk provides nutrients.

The egg yolk is absorbed into the chicks abdomen, this will provide the chick the nutrients and energy it needs to hatch and will allow enough energy for the next couple days as the chick learns to eat and drink.

Eggs are now placed on “lockdown” this means that humidity will be increased to the 65% – 75% that we discussed earlier, rotating of eggs will stop. The incubator will not be opened now until the chicks are ready to be transferred to their brooder. A brooder is a draft free place the chicks will stay  with a heat source to keep them warm as they grow and become stronger over the next days and weeks.

Day 28 – Hatch begins. Egg tooth is used to break through the shell. The chick will be wet when it first comes out. Once the chicks are dry and fluffy they are transferred to the brooder, this is usually after 24 hours.

Pipping is a tiring process, some chicks take a little longer than others from initial break to completely hatching. Little chirps can be heard once the shell has been cracked. They are learning how to walk, they tend to stumble across the incubator and often knocking around other eggs. Chicks will sleep a lot after they have hatched.

Here you can see the tiny crack the chick has made. The chick will continue to use the egg tooth to chip away pieces of the shell, otherwise known as “unzipping”.  You can hear little chirps through the shell.

This chick has been chipping away at the shell. Taking little breaks, the chick will eventually break out completely.

Once the chick has “unzipped” the shell, the chick can start to push itself out. Hatched chicks will often come over to the newly hatching chick and wait for them to hatch. Chirps will be exchanged as they encourage each other to continue to hatch. 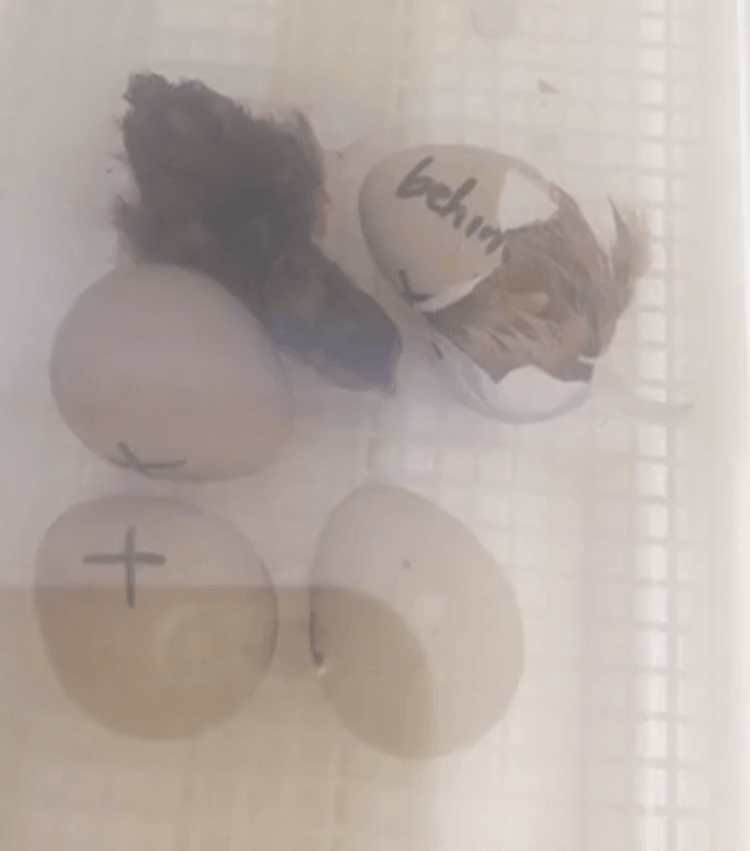 You can see the chicks beak and wings here

The chick has finally completed the hatching process. The chick is wet and will remain in the incubator until it dries and is all fluffy. The other chicks will go over and check the new chick out. Chicks will be very tired after they have completed their hatch. 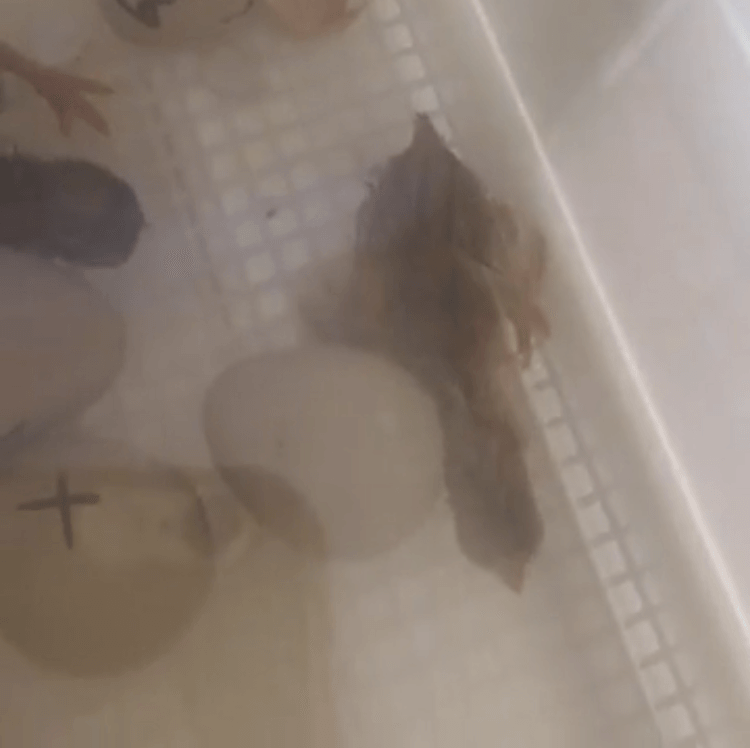 The chick will begin to try and walk around, since the legs have never been used before, there will be a lot of stumbling around. This is where the incubator starts to get messy as eggs start being rolled around and walked on. 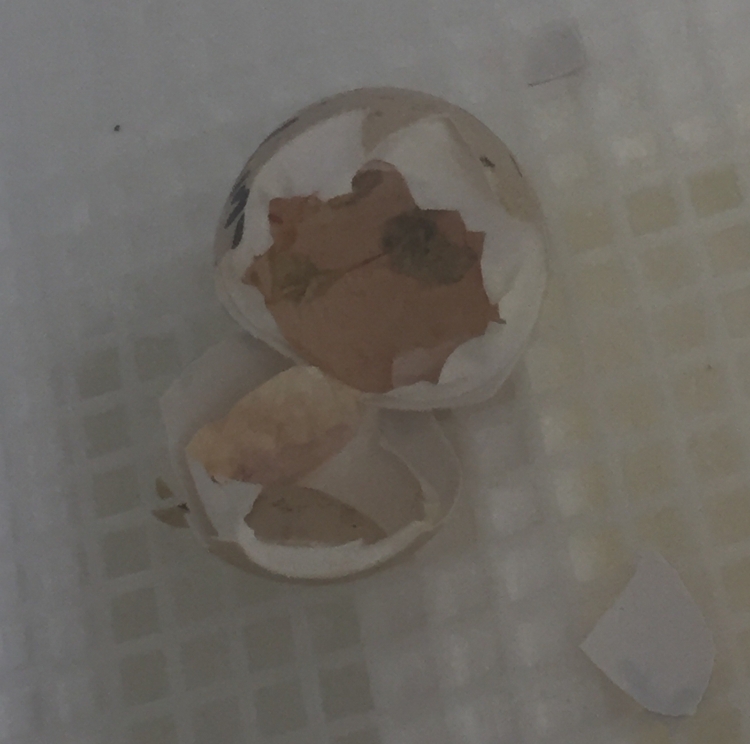 The empty shell of a chick who is now hatched. We can see the dark spot that was once the yolk and food/nutrient supply for the chick. This has since been absorbed into the chick to provide the energy needed to hatch and learn to eat and drink in its first days in the world.

The chick has “unzipped” the egg. Started by pipping through one part of the egg and rotating to chip away at the egg so it can break free. ​​​

​Once unzipped, the chick will begin to push with its feet to open the shell.

​The tired chick has almost completed the hatch.

The babies will cuddle together, rest and soon their wet bodies will be covered in their fluffy down feathers.

The process is nothing short of amazing and magical. It is breath taking to see the chick finally break through its hard shell. Just like in humans, it is a beautiful, magical thing to watch a new baby come into the world.

I hope this article was informative and educational. It was a pleasure to share this experience with you!

3 thoughts on “The Magical Journey from Egg to Chick”

This site uses Akismet to reduce spam. Learn how your comment data is processed.